Working together as a community to establish a solid foundation towards independence,
community wellbeing, and cultural identity now and for future generations.

The consent determination for Part A recognised exclusive and non-exclusive rights and interests to an area of approximately 4,123 square kilometres consisting largely of unallocated Crown land located in the Hamersley Ranges, and also includes a portion of Yalleen and Mt Stuart pastoral stations and a portion of Reserve 38991.

The consent determination for Part B recognised exclusive and non-exclusive rights and interests to an area of approximately 5, 720 square kilometres including the Robe River, the Bungaroo Valley and the Buckland Ranges.

The Robe River, or Jajiwura, has long been considered the ‘lifeblood of the RRK people’ and the ‘main artery of the RRK country’. Jajiwura is central to the RRK people’s identity and it is where we take our name as the Robe River Kuruma people. RRK’s understanding of our identity and our place in the world, and that of the river, can not be separated. Jajiwura contains other significant places such as archaeological sites, camp grounds, thalu sites and law grounds.

For more information on the RRK peoples determination click here:

As a Registered Native Title Body Corporate or PBC for the RRK people. RRKAC must have strong governance, and comply with the Corporations (Aboriginal and Torres Strait Islander) Act 2006 also known as the CATSI Act. RRKAC must also report to the Office of the Registrar of Indigenous Corporations, also known as ORIC.

In 2018 RRKAC was awarded a finalist of the National 2018 Indigenous Governance Awards. These awards recognise and celebrate outstanding Aboriginal and Torres Strait Islander led organisations that make extraordinary contributions to communities and to the nation. 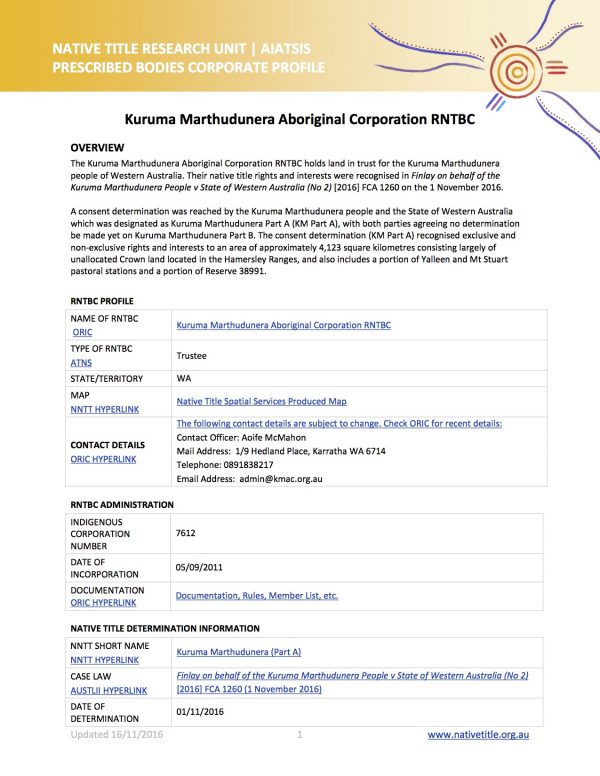 Robe River Kuruma Aboriginal Corporation (KMAC), established in 2013, is the registered native title body corporate for the Robe River Kuruma (RRK) people. KMAC is also the provider of community projects, programs and services developed and delivered for the benefit of the RRK people.

The RRK people have traditional rights to an area of about 15,759 square kilometres in Western Australia’s Pilbara region within the Shire of Ashburton and Pannawonica. Found within RRK country is part of the Fortescue River, and the complete river system of the Robe River.

The Part A area was determined in November 1, 2016, with an on-Country Federal Court hearing. The consent determination recognised the Robe River Kuruma people’s exclusive and non-exclusive rights to an area about 4,123 square kilometres in size. The Part A area is often referred to as the Silvergrass area, and is home to many sacred sites and permanent pools along the Robe River.

RRKAC, as the Prescribed Body Corporate (PBC) looks after the determined Part A and Part B areas.

About Us
Prescribed Body Corporate
Our Structure
Menu

Please note: Aboriginal and Torres Strait Islander people should be aware that this website may contain images, voices or names of deceased persons in photographs, film, audio recordings or printed material.